Well, here's another post. I'm still not sure what to really put in these (I'm really in a crunch time for my exams right now) so I figured I'd list a few things that I will hopefully get to post about (or would like to)

-Some basic HLSL shaders would probably be fun (a geometry shader might be in there at some point too...although they are annoying...) probably basic diffuse, specular, normal mapping maybe some cube mapping.

-I might post some stuff about the A* Pathing that I used for the exam game that I'm making right now and how to go about doing the checks and the general way for 4 direction A* searching (8 isn't that much harder, just adding more checks)

-If I get the time I still want to finish developing my GUI for an inventory that would use some STL containers to make it switch between two "packs" etc.

I guess one of the projects besides my Exam Game that I'm making is a project I am starting tonight actually. It's based on this image that is floating around the web currently...The Chainsaw Katana. 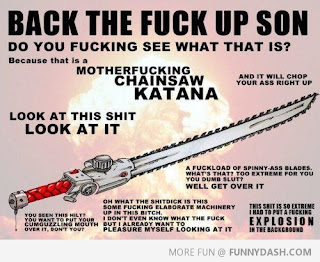 So I started modeling this in 3dsMax a lil while ago. I have the very bottom of the hilt done (had some issues on how I wanted to make it look compared to the picture so had to do it a few times before I was happy with it.) and a basic blockout of the hilt part (still debating on whether or not I should model the braids or just nDo it and then use the Normal Map for the textures as well (think in the long run it will be easier.

This is my project for giving me a much needed break from actual programming (still have to read my theory but hey, it's a work in progress).

Well thanks for reading, I'll probably add pictures later or in the next post.

T.Edit();
Here's the first WIP pic, just the hilt (haven't made the pull cord on the bottom or whatever the side circle thing is) gonna have to find some ref of chainsaws I think to make the next big piece believeable.
T.Out();

Posted by TEvashkevich at 1:03 PM No comments:

So, this is my first blog post (of hopefully which there will be more if I can find the time between school, work and and schoolwork). Right now I don't have a lot to post about so I guess I'll start with the

WHO IS THIS GUY?!

Well my name is Travis Evashkevich (as you can probably tell from my profile) and I am originally from a little middle of no where town in Alberta, Canada but was also living in Fort Mcmurray, Canada for the last few years of my high schooling days as well as for a few years of working after I graduated. Currently I'm bouncing back and forth between another small-ish town Kortrijk, Belgium for school and Fort Mcmurray for work during my summers.

I'm going to school for being a Technical Artist with a major of Game Development ( basically in our school it means that I do programming and 3D but less emphasis on the art related stuff, 3D still must look good but not much on the pre drafting and drawing stuff).

So I guess I'll probably be posting tid bits for helping other people (maybe some tutorials on 3D or c++ or maybe a few simple shaders in HLSL could be fun) or just to showcase stuff I make.

So, there's  my quick recent relevant history and hopefully the next little while (during exams might be tough) I'll get some more posts rolling here.