So, in the last post, I covered the 3D stuff I've been up to, as well as shared the game that I helped make with other members of my team.

RADIO SHOW:
I actually just realized that I never did write the post that I thought I had about the radio show so...this is a little awkward since I thought I had posted about it. But here it goes, a little selfish self promoting is in order!

Last year I was approached about being the host for a radio show here in Belgium to which I obviously said, "You want to put my silly ass on the radio?" and even after that they still wanted to.  Although the radio show we do is completely different from the original show that was mentioned to me (interviewing other foreign people like myself about their time in Belgium and travels etc) it's been fun just getting people to come around and talk about games and trying to make people actually think about the games they are playing (or even not playing).

So the Radio Show goes by the name of LEVEL UP. You can find our facebook page here

This is where we post our teasers, photos and other stuff that pertains to Level Up. Since we are about to air our 9th Episode (Yea I'm that far behind on actually documenting it here that I even had a show...that we're now about to air the 9th....) that means you've missed out on the last 8, which you can never hear unfortun...JUST KIDIIIIING, you can still hear them because we put them online on MixCloud as well

This is the link to find any of the previous and upcoming shows. I hope that people enjoy the shows because it has been fun making them.  Really, I never thought I would enjoy talking for so long on something that people could actually hear me on...It's one of those things I've always been kind of weirded out about haha, but anyways it seems to have passed.

The fun part for me (and also the hardest and most stressful part) is trying to get a hold of industry people for Industry Talk. It's fun talking to the professionals about our topics for the show and seeing what they think cause sometimes you receive even more thought provoking things such as on the Game Addiction Episode when I got to interview +James Portnow , a game designer and writer for Extra Credits over at Penny Arcade.

But anyways, I guess it's time to do the brief part of the post about the last little project that I was doing for the last year and a half now which has also grown to be bigger than I initially planned.

STUDY NIGHT:
So Study Nights...It's exactly what it sounds like but since DAE didn't have a formal study night for people to kind of come together and give opinions on projects, work and socialize together (which we ALL benefit from) which I still don't know if it's because of DAE's kind of "recluse" nature that the students end up with because of the amount of work and projects that are due or what, but, I decided to try and bring people together.

Study Night actually started out last year (in my second year, 2011/2012 year). I decided that since, now that we were the second year of the international classes of DAE we should help out the new first years to hopefully help them pass with a higher ratio than we had. Since we (And I) still think that one of the reasons we didn't have a good ratio is because we had no one above to help us really as we were kind of  like the smelly kid in school, the Dutch classes didn't really want anything to do with us because they thought we were doing the English side for special treatment (Even the teachers thought it too, whether or not they will admit it though...) which we never received.

Anyways, As I said, I was trying to just make the Internationals look a little less bad cause our pass ratio sucked ...real bad in the first year of it running.  At the time, I did have the odd Dutch side person that wanted to come but I decided that if they wanted to treat us like we were different in the first year, we could do the same with our new Study Night  as well. They never made the effort (for the most part, as there of course is some of the Dutch side that were and still remain to be really cool about us being in the other class) to include us in stuff so I wasn't about to do the same for them AND MAINLY because I didn't want to plan something for a ton of people, we had about 45 people with the first and second years.

I saw that this had actually improved the pass rate (whether that year just had better and more studious people, I'll never really know cause I can't run the same people through it twice ...and I lack a Time Machine (although I do have a book on it now.. <.< >.>)) of the people that attended because we could help the people that needed the help.

This year (2012/2013) I decided to take the plunge (mainly cause I'm kind of an idiot and in the intro day of the year, I was giving a speech with our program coordinator, Rik Leenknegt and I meant to actually just say that the internationals in the room (as the plan originally was that the Intl and the Dutch would be two talks and I was to talk to the Intl's...but they put them together...), I was going to run the study night for them again...but I didn't have the heart so I said I would try to run it for everyone this year...I cursed myself later for saying it and not checking into anything before hand...) and try and run it for everyone. I tried a few times just doing it where we had always had it prior, The Studios. This proved to be pretty ok for about 2 sessions then it started to grow..and we ran out of plugs and chairs.

So at this point I didn't have much choice but to ask Rik if we could hold it at the school and he pointed me to the head of infrastructure at Howest and we arranged to have it in the school cafeteria since it has lots of space and we can take the plugs from the art room to make it accessible for more.  I was approached by a few people that said they wanted to help with Study Night so I said ok and now the team consists of two teachers and two students.

Stijn Grooten and myself were interviewed by one of Belgiums Newspapers about Study Night and why it seems that it had to be started by a Canuck and someone hadn't already started it.
(http://www.nieuwsblad.be/article/detail.aspx?articleid=DMF20130107_00424985  Here's the link but it's in Dutch just saying)

I must say that I'm just happy people like it and find it useful.

Well now that that is all rambled out. You're pretty much caught up with my last semester and year of stuff I guess.

Soooooo...I was going to update this a bit ago...then I got into school work, the radio show (having to not only do the show but try and coordinate with industry professionals to do the Industry Talk portion of it...not the easiest thing..) organizing Study Nights for the whole of Digital Arts and Entertainment...Yea it's been busy.  Now that I have some time with the new semester start (and a bout of a throat infection, bronchitis and only 2 days of school) I can catch up with what I've been doing since the last one...Buckle up. It's going to be a long one. Think I might split the updates into 2 posts (at least)

3D wise, here's what I've been up to. I finished this vehicle for my exam. 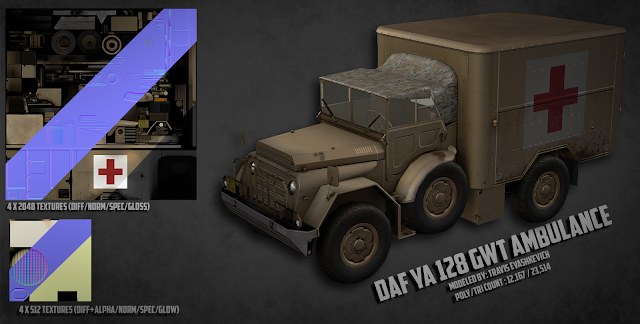 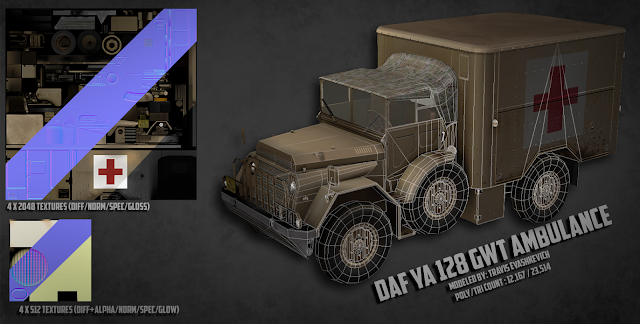 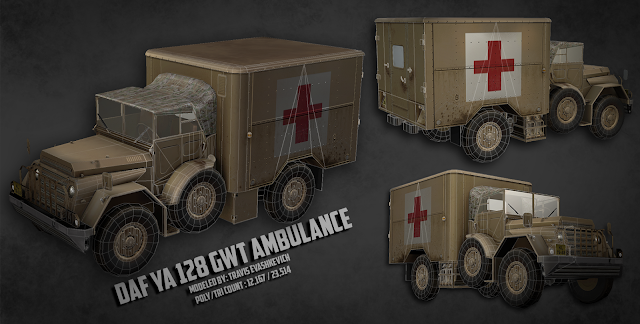 Before the Vehicle project, we had to make a gun, originally we were going to have to make a gun based on designs from the art side of our program and right before we had to pick it was opened up that we could do either (as some of the art designs were ...*cough*unrealistic and stupid *uncough*).  Anyways, I chose to go with the artist design and it was fun to do. I had to make some modifications to the original design due to how the gun itself is actually put together but overall it was good.

The tri count might be a bit high on it but it was also modeled to be snapped open and reloaded (instead of just shoving the harpoons down the barrel with the charges attached  (which doesn't make much sense to me but hey, never know I guess) 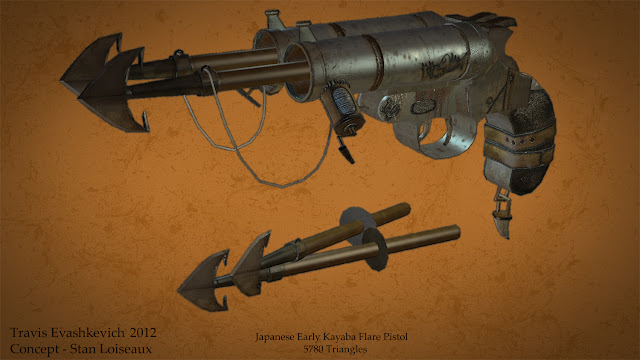 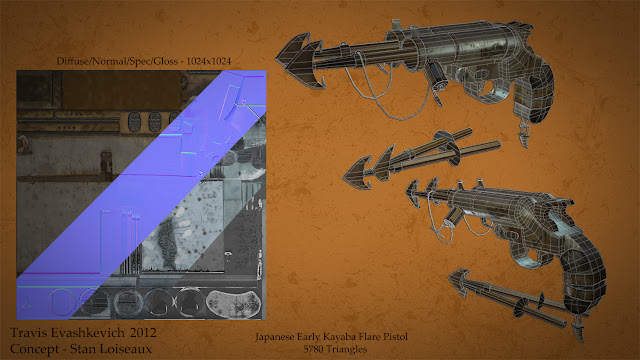 And unfortunately I didn't make this little cutie, this was made by my buddy and team
Fluffy
Animal
Projects  Artist - Brent Rombouts and I just couldn't help but share her with you guys. This is ChiChi, our intelligent guinea pig with.......a JETPACK!!!1!11one! 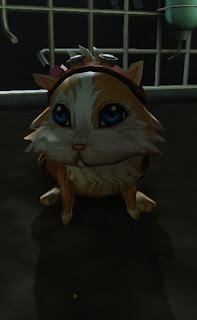 We had to make a level for a game and we chose this as our heroine. We got the level done and you can actually download and play it if you'd like. I have the installer on my dropbox, so feel free to just download, do the small install and give it a shot. Just make sure you check out the help section for controls and such.

And onto the Next Part!


Posted by TEvashkevich at 12:52 PM No comments: